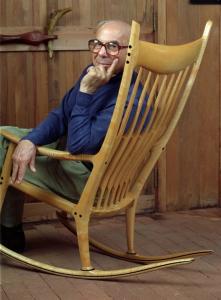 Sam’s father, Nasif, peddled vegetables and dry goods from a horse-drawn carriage, out of which Sam’s mother also sold her handmade lace, embroidered linens, and crochet work. They arrived to the United States from the mountain village of Douma in northern Lebanon, and were counted among the first Arabic-speakers in California. Sam took much pride in his Arab heritage, and carried on his parents’ traditional values of respect and hard work. He became well known not only for his skill, but for treating all of his customers with compassion and generosity.

One of nine children, Sam had always been a woodworking enthusiast; his love of craftsmanship drew from his early admiration of his mother’s skills. Astonishing his parents, at elementary age, he used kitchen knives to carve wooden toy guns, swords and trucks, and to make a breadboard for his mother.

Sam attended Chaffey High School, where he enrolled in his first woodworking class and received ample praise by his art teacher for having extraordinary skill. Only a little while after landing a job in the art department of the Vortox Manufacturing Company in Claremont, Maloof was drafted into the United States Army on October 11, 1941, rising from private to master sergeant and serving until 1945.

After marrying his wife, Alfreda Louise Ward, on June 27th, 1948, the couple moved into a house in Ontario, California, and Sam set up a furniture workshop in the garage. Completely self-taught, and without any formal training in woodworking, Sam built a set of furniture for the house using only salvaged materials and hardly any tools. Instead of following plans, Sam would first simply imagine the object in his head, and then put his hands to work. He refined the shape with hand tools to add comfort and beauty, carefully considering the appearance of every angle of the piece, even the backs of chairs and cabinet interiors.

Sam and his wife relocated to a six-bedroom house in Alta Loma, California, and over time, Maloof added sixteen rooms to the original structure. The house was later moved three miles away and now serves as the office of the Sam and Alfreda Maloof Foundation for Arts and Crafts, as well as the Sam Maloof Historic Residence and Woodworking Studio, which offers public tours.

Sam’s unique and well-made designs drew attention from woodworkers and collectors all around the world.  His hi-fi cabinets, cork-top coffee tables and other modern pieces were instantly praised by home magazine editors and trend-setting interior designers. Presidents Jimmy Carter and Ronald Reagan both used Maloof’s signature rocking chairs, regarded by many craft artists as the most difficult type of furniture to make, in the White House.

In the 1960s, Maloof turned down an offer of $22 million for the rights to mass-produce his original designs. He said that the coldness of factory-made furniture could not compare in warmth and character to wood that a craftsman worked on from start to finish. He believed passionately in the handmade object: “We marvel and exclaim about the machine, and yet nothing has been designed or made, nor ever will be, as wondrous as the hands of man. What it produces has no element of surprise or feeling that an object made by hand may have. It leaves no room for change.”

Maloof’s work can be found in the Metropolitan Museum of Art, the Los Angeles County Museum of Art, the Philadelphia Museum of Art, and the Smithsonian American Art Museum. In 1985, Maloof became the first craftsman to receive a MacArthur “Genius” grant. The Smithsonian Institution named him “America’s most renowned contemporary furniture craftsman” and People magazine dubbed him “The Hemingway of Hardwood.” And despite all of this, Maloof refused to identify himself as anything other than a woodworker. A humble man, Sam was also described by Jonathan Leo Fairbanks, curator emeritus of American decorative sculpture for Boston’s Museum of Fine Arts, as “…drenched with more humanity or love of humanity and out-flowing generosity than can be found in a dozen other people.”

Sam Maloof is named alongside the legendary Japanese American woodworker George Nakashima as the two most well-known wood craftsmen in the United States. Both men serve as true testaments to the fact that America’s prosperity is built upon the various and innumerable contributions of immigrants.

Maloof, who passed away in 2009 at the age of 93, was one of America’s preeminent makers of handcrafted furniture. Referred to by President Carter as his personal “woodworking hero,” Maloof remained committed to the values of craftsmanship, integrity, and compassion which he learned from his parents’ heritage.

Read more stories about Arab immigrants and their descendants on the "Together We Came" main page.