The Magnitude of the Crisis: #Yalla2016 Day 1 Panel

The first day of AAI’s National Leadership Conference, #Yalla2016, was devoted to examining U.S. policy on the Syrian refugee crisis and considering ways to push Congress and the Obama administration to do more to help refugees. We were proud to have the whole day of programming co-sponsored by 15 national, international, and Syrian-American organizations, many of whom are leading the difficult work of providing services to refugees on the ground in camps and urban areas. On a panel titled, “The Magnitude of the Crisis” three of our co-sponsoring organizations joined a discussion that painted a clear, desperate picture about the necessity and challenges of their work.

Refugees fleeing war have to navigate a long road of systems, applications, screenings, and travel to be accepted as refugees or 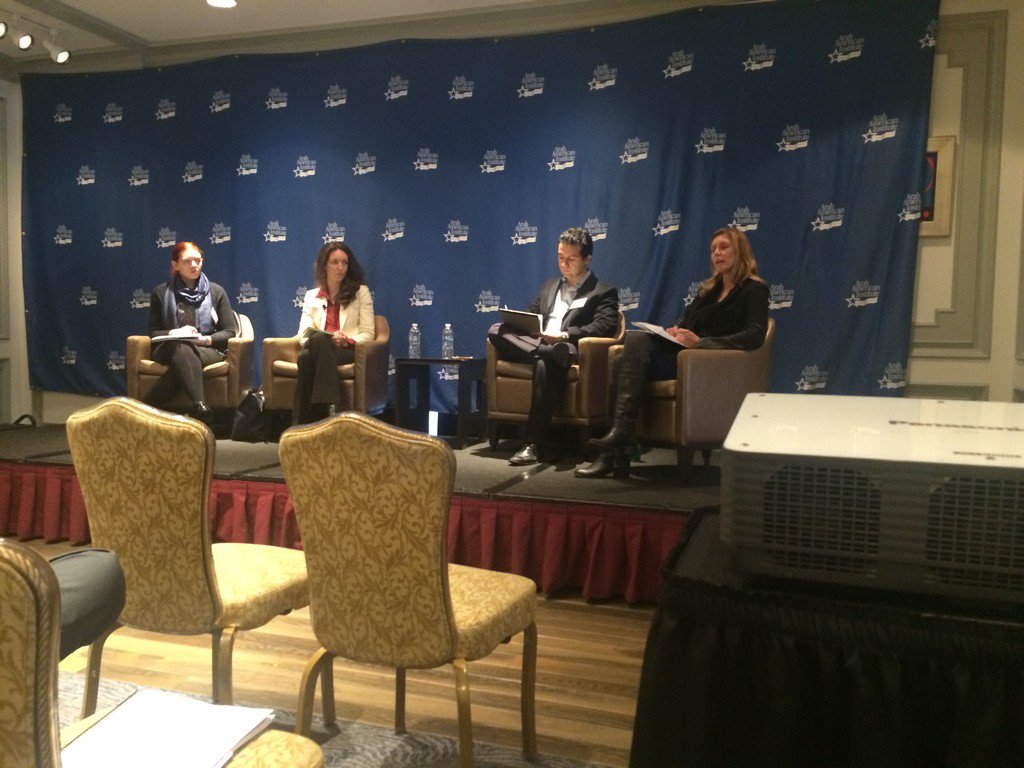 asylum seekers in other countries. The panelists, Annie Sovcik (Center for Victims of Torture), Jen Smyers (Church World Service), Britanny Vanderhoof (HIAS), and Kamal Essahab (NILC) together shared what the needs are of refugees at every point in their journey, stressing that large donors like UNHCR need to be scaling up aid to alleviate suffering not just in refugee camps, but at every stage of a refugees journey.

Annie Sovcik from the Center for Victims of Torture shared the great work being done in refugee camps in Jordan to help relieve symptoms of mental disorders that develop from the trauma of war and leaving behind ones home. Mental health is a necessary component of humanitarian aid, according to Sovcik, in order for refugees to retain the feelings of hope and dignity.

Jen Smyers of Church World Service emphasized the need to push our government not only to bring in more refugees, but actually do so. Alarmingly, there are 20,000 refugees that have passed the U.S. vetting process since 2008 but have not actually been resettled. The U.S. government could get these done with a simple final approval.

Britanny Vanderhoof of the Hebrew Immigrant Aid Society explained more of what the U.S. government can do by eliminating the redundancies in the vetting and approval processes. To effect change in the government, there needs to be mobilization at the local level in welcoming refugees and shaping the conversation around humanity instead of national security. These panelists offered us a look into the difficulties they face when welcoming refugees, as well as excellent suggestions as to how the Arab American community can improve the government’s response.

Latest News about #Yalla2016 Day 1: The Magnitude of the Crisis and Why the U.S. Must Respond

AAI Dismayed by DHS Failure to Re-designate TPS for Syria

FOR IMMEDIATE RELEASE  CONTACT: Tess M. Waggoner | twaggoner@aaiusa.org | (202) 429-9210 August 1, 2019 Washington, D.C.- Today, the Department of Homeland Security (DHS) announced that it will extend, but not re-designate, temporary protected status (TPS) for Syria. The failure to re-designate TPS for Syria abandon’s the moral and legal...

Extend and Re-Designate TPS for Syria

The Department of Homeland Security (DHS)’s temporary protected status (TPS) allows citizens of specified war-torn or disaster-impacted countries to live and work in the U.S. Removing a country from the list requires nationals present in the U.S. to either find another visa program or return to their home country. Syria...

Part of the Solution: How the US can be a positive influence in Syria and Yemen

Syria and Yemen represent two of the final embers of the Arab Spring which swept across the region this decade. The conflicts in both countries have become, in part, proxy wars which have attracted regional players and international actors alike. For its part, U.S. policy has often exacerbated, and not...

By Allison Ulven On June 20, the United Nations recognizes World Refugee Day to raise awareness about the the ongoing crises and ask that people do anything they can to help those in need. As people around the world continue to flee their homes in search of shelter, opportunity, and...